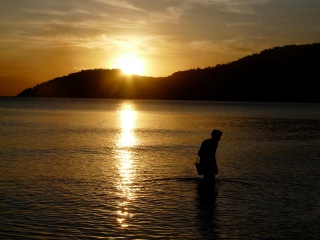 Today was one of those days that I know I will look back on and think on for many years to come. There are certain days when things happen that just stir your soul, today was one of them for me. We visited the family of a little boy who died this weekend. He was 10 years old, the oldest of five children. He fell out of a tree onto a stick. It could happen anywhere in the world, children climb, accidents happen, life is so fragile. However the events of the past few days wouldn’t happen anywhere. I get so accustomed to daily life here, I often forget some of the blaring differences, but when tragedy strikes I see again just how different our situations are, because of where we live. It makes me sad, so very heart heavy, but I pray that God will use this day, in only a way He can, for His great glory.

Friday lunch time we were making eggs and toast for lunch. Just as we were sitting down to eat we heard the sound of a scooter coming up our path (this hardly ever happens), we heard loud talking and seen people running. My heart always beats faster when I see people running here because I know it is an emergency, they never usually run in this heat. Outside a group of people were gathered and a man was siting with a boy cradled in his arms. The first thing I noticed was that the boys legs were shaking like crazy. Shock. They told us the boy and his Dad (who was holding him) were climbing a mango tree, when the boy slipped, fell out of the tree and landed on a stick. They had brought the boy to a nurse on the back of a scooter in another village (over really rough roads and the glaring heat), the nurse said he needed to go to hospital but the vans/jeeps that go to town had all left that morning. They wanted to know would we take them to the hospital in the car. Of course we will. I could see the immediate relief and gratitude on the faces of the men who had come. Hope. Inside my stomach just became a huge knot. I have been to the hospital several times, it is so basic, nothing like an emergency room back home. I knew the boy was serious, there had been a lot of blood and his breathing was labored. Danny grabbed a few things, and off they went already thanking us over and over again, my stomach churned. Reality.

Danny returned later that afternoon. He had dropped them off at the hospital, seen there was a Doctor there to attend to him, gave them some money for some things they needed, and came home to us. He said the little boy did not cry once and spoke to him along the way in the car. He was very polite.

Saturday morning, I kept wondering about the boy and decided to go down the village to find out if anyone had heard some news. I didn’t have to go far, the news had made it back to the village, that he had died in the night.
Yesterday afternoon an ambulance returned to the village, to bring the body back to their house.

Visiting with the family.

So today after lunch we went with some of the believers from church to visit the family. We brought bags of coffee, sugar and things they would need for all the people that will be visiting them during the wake. We had to park the car on the “street’ and then walk quite a way before coming to a “bridge” then down a little path, over some rocks and round a corner. Their house was right on the beach. There was quite a crowd gathered outside. As soon as the Dad saw us, he got up and came over, smiling, he shook our hand and motioned us inside their little house. One room, small, so hot, two little wooden benches and everyone else just sat on the floor or on the stairs. There in the middle of the floor, wrapped in a sheet lay the body of the little boy. Outside they were hammering and sawing, making a coffin. I was praying “Lord give me the words”. No words came. I had a huge lump in my throat. Everyone else talked away, people gathered to come look at the “Americanos” who had come to visit. I felt so on display and all I wanted to do was talk quietly with this dear lady, and tell her how sorry I was for her loss, and I couldn’t. Her twin boys, who are three years old, slept with their heads on her knee, her one year old was crying in the background. Life can be so hard for these dear people. There is no hope.

The Dad sitting next to the body of the boy, started to talk over the things that had happened. Not complaining about the circumstances (he knows no different) just telling us all that took place before the boy died.

The doctors at the hospital had decided the boy needed surgery, but there was no X-Ray machine at the hospital. There used to be, but it was either broken or no longer there. He told them the boy needed to be taken to the hospital in the capital of Palawan which is about 3 1/2 hours away from the hospital they were at. They didn’t get to leave right away though because if you are traveling in a ambulance then you are responsive to pay for the diesel and they had to go and buy that first. Then the driver was drunk, so they had to wait for him to sober up. All in all it was hours before they left for Puerto Princesa. They arrived at 10pm that night. The boy died shortly after midnight.

As the father describes this day, he is not mad, nor does he question the state of things which led to all of this. In fact he uses the words, “Ganoon ang buhay”. That is the way life is. And it is so true.  This is the way their lives are. They live far away from medical care and simple comfort and other opportunities that we take for granted on a daily basis.

What the father shared next though, broke my heart. The only time he struggled to talk and dropped his eyes in our whole conversation, was when he shared how the doctor told him that he should not have given his son a glass of water, after he had fallen. In the whole state of things, the only fault he could see was his. I whispered to Danny (I still had no words)to tell him that it wasn’t his fault, the boy was badly injured and the water wouldn’t have made any difference.  As Danny talked, I prayed, words came in my heart to the Lord. I watched as the man’s eyes, met Danny’s, searching for hope. Wanting what he said to be true, that it wasn’t his fault. My heart broke inside thinking that he was always going to wonder what might have happened if he hadn’t of given that glass of water.

We left after a while. Said our goodbyes and drove home.

We feel so sad that life is so hard for these people who live so far from medical help. Having to pay for diesel for an ambulance when they already have so little. Outraged that the driver would be drunk and they have to wait for him to sober up. It is hard to imagine a hospital without an x-ray machine. It stirs great pity on our hearts, and it should. Life is hard, so very hard.

But what stirred my heart and soul so deeply today, was not this, it was the Dad’s eyes. He has no Eternal Hope. He has not yet heard the message of Salvation. He does not know of the peace that passeth all understanding. All he knows tonight is death. He has not yet experienced new life in Christ. As terrible as it is to be without medical care because of living in such a remote place, it is much more grave to be without the knowledge of Salvation. People need the Lord.

There are people all around us who are just like this dear man. Lost in darkness and fear. Please pray with us that we will endeavor to live and serve the Lord in a way that all in this area can hear the message of the gospel. We hope to travel soon to this village (with the men in the church) to teach the Truth of God’s Word to these dear people. I pray for this father and mother, that they will want to listen to the Truth and that God and God alone will be their hope and strength. This world in which they live has nothing to offer, but our God is the source of all Life.

5 thoughts on “"I shouldn’t have given him water."”